A shy, chubby kid in Chiyoko's class. He is very good in sumo wrestling for despite his age and won the school trophy. In the past, the students called him "Yokozuna". However now he is been called "Kuishinbo" (because he eats three lunches) which really upsets him, thanks to Mr. Matsuoka who came up with the name. The next day, Mr. Matsuoka apologized for his manners and he asked him to called him "Yokozuna" instead. 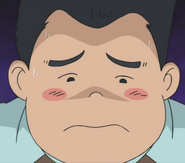 Iwata upset of being call "Kuishinbo". 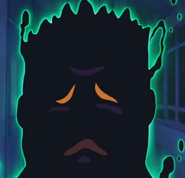 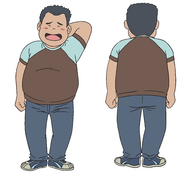 Iwata
Add a photo to this gallery
Retrieved from "https://kuromajosangatooru.fandom.com/wiki/Daigoro_Iwata?oldid=9909"
Community content is available under CC-BY-SA unless otherwise noted.